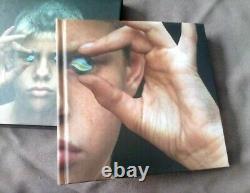 Marillion/ Marbles "Deluxe Campaign Edition"/ 2xCD/ Like New/ Very Rare. Inner Hard Back Book is MINT. Ok now that boring stuff is out of the way I can tell you Marillion fans about my Deluxe Campaign Edition, photos of which are shown above- yes THAT is MY copy, not stock photos- ever! I just missed the deadline cut off date for my name to be included within the 128 page book- oh well some you win- some you lose- I lost! I have stored this in my animal/kiddy/damp/food/smoke/alien- free music room ever since then.

As some of you already know- illness forces my sale of nearly all of my 10,000 item collection, but that's another story for another day! There is a 1.5 cm long indentation which is only on the rear of the rigid outer box to the top left hand corner- which was on the box when I first had it delivered. So I can only assume some editions were subject to some intense pressure from an outside source whilst being moved around the warehouse?

This album is a Marillion first- it is a double album a full 2 CDs of Marillion music. This version, a pre- order version (known as the Deluxe Campaign Edition) of Marbles is packaged as a 28 page hard-bound book, packed in a rigid slip case.

Mastered at Super Audio Mastering. Written, recorded and mixed at The Racket Club, Buckinghamshire for the whole of 2002, 2003 and the beginning of 2004! CD1 - The Invisible Man, Marbles 1, Genie, Fantastic Place, The Only Unforgivable Thing, Marbles II, Ocean Cloud. CD2 - Marbles III, The Damage, Don't Hurt Yourself, You're Gone, Angelina, Drilling Holes, Marbles IV, Neverland. Now the really boring stuff. As stated above- we take great care in our packing of your high value rare item.

This item is in the category "Music\CDs". The seller is "musicmeadows" and is located in this country: GB. This item can be shipped to United Kingdom, European Union.