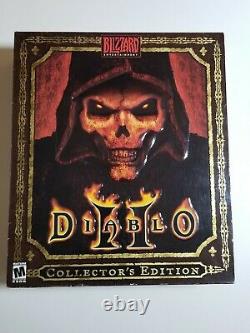 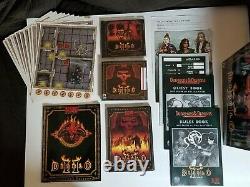 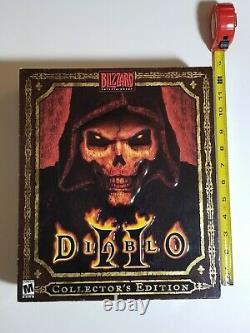 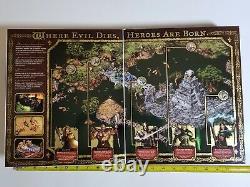 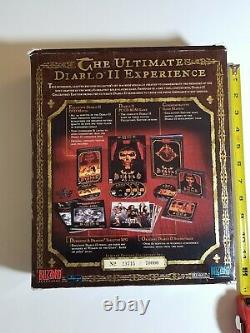 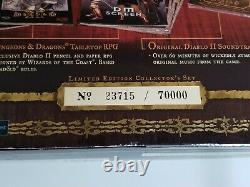 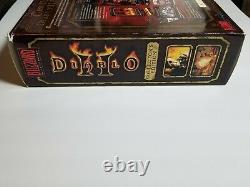 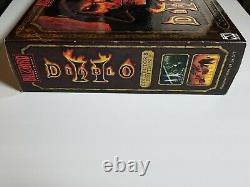 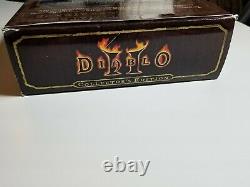 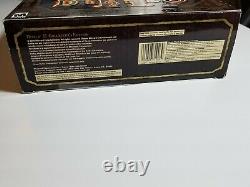 The Collectors Edition includes the four-CD game, a 24-minute Diablo II movie on DVD and in letter-box format, the 70-minute soundtrack, and the D&D Diablo II pen-and-paper box set for playing D&D in the Diablo II setting. Since the beginning of time, the forces of order and chaos have been engaged in an eternal struggle to decide the fate of all creation. That struggle has now come to the mortal realm, and neither man, demon, nor angel will be left unscathed. Diablo, lord of terror, and youngest of the three prime evils, awoke from his long sleep beneath the dark earth. Setting in motion a grand scheme to free his exiled brothers, Mephisto and Baal, Diablo took control of the small western kingdom of Khanduras.

Working from deep within the ancient catacombs beneath the town of Tristram, Diablo gripped the entire populace in a blanket of fear and paranoia. Ultimately, as even Khanduras's good King Leoric fell under Diablo's wicked power, a lone hero arose to challenge the darkness that had engulfed the land. After plumbing the hellish depths of the labyrinth under Tristram, the nameless hero finally confronted the lord of terror himself.

Knowing full well that Diablo's spirit could never be truly destroyed, the hero made the noblest sacrifice of all: casting his soul and his very sanity aside, the hero took the spirit of Diablo into himself, hoping that his own strength of will could contain the demon within. The hero could never have known that his selfless act would not only ensure Diablo's victory, but would also irrevocably damn his soul for all time. Several changes have been made in the general gameplay of Diablo. The first thing you'll notice is the new interface.

The familiar balls of health and mana frame the interface, but now more of the screen is devoted to the game. The text window in the middle of the screen is gone. Now, dialogue from NPCs appears over the respective NPC's head, and item descriptions and text also appear over objects. Another new addition is the stamina bar. One big gameplay change is the ability to run.

Now, you can run, but only for limited durations. When you do run, the stamina bar slowly depletes. When it runs out, you need to rest until it starts to fill up again. There will be items and spells that increase your stamina, but running will always be a limited ability. Although running obviously allows you to travel faster, it will leave you more vulnerable to attack, although you can go from run to attack seamlessly, as there is no pause between the two actions. Moving around in Diablo has been improved in other ways as well. To cut down on the tediousness of walking back and forth between cleared-out areas and town, Blizzard North has added waypoints to the game. However, these aren't waypoints in the real-time strategy sense. These waypoints are more like teleportation spots, quick portals between two or more locations in the same act.

Each town has a waypoint, and various locations around the wilderness also have waypoints. You won't be able to use a waypoint until you've actually visited it once, and you won't be able to jump through it until you have touched at least two, since this is not a one-way travel system to explore the map. Instead, it's a convenience for moving about already explored areas.

The actual development of your character is also different. In addition, the skill sets of each character are really differentiated, so that the abilities of the characters do not overlap. One other note about character development is that dying causes you to lose experience points. The designers wanted to make death something you would want to avoid even more , so they added experience loss in addition to equipment loss. However, you'll never lose enough experience to drop a level. Not only is development different, but the classes are different as well. There are now five characters to choose from when you play: amazon, barbarian, necromancer, paladin, and sorceress.

Each has his or her own strengths and weaknesses, although all should be very different and enjoyable to play. One of the key reasons why Diablo II looks like it will have immense replay value is because of the great differences between classes. Amazon: A good all-around class with some spell use and special physical attacks. She is best with the bow, but also good with the spear and javelin, excelling in long-range attacks.

Barbarian: A powerful brute bereft of magic but possessed of potent combat skills. He is the only character that can wield two weapons at once; and this ability is available from level one! Necromancer: A weak character who can command undead minions to aid him. His spells let him animate the dead and enhance their strength. He has some offensive magic.

Paladin: This warrior is second in physical strength and the best defensive fighter. He has healing and defensive spells to go with his powerful melee attacks. Sorceress: She is also a weak fighter but possesses the most powerful magic arsenal, complete with fire, cold, and lightning spells. The new trading menu is a big improvement over Diablo, where you had to dump your items on the ground and hope the other player paid you.

If he agrees, a trading window pops up, where you can place your items for trade and he can place his compensation. It is not unlike the trading window for EverQuest. Another new feature we noticed but that took us a while to comprehend was the socket items. You'll find weapons, shields, and helms in the game that have sockets in them. You'll also find gems in rare instances in caves and off of dead monsters' bodies.

These gems can be placed in the sockets to convey special powers in the items, like the Materia system in Final Fantasy VII. A topaz, for instance, adds lightning damage if you place it in a weapon, but adds lightning resistance if you put it in armor.

In our short time playing, we've already seen several different gems, including sapphires, emeralds, diamonds, and jeweled skulls. This adds yet another element to the already rich plethora of items you can find in the game.

Relatively low number variant #23715. Extremely Rare Collector's Item comes with Dungeons & Dragons Board Game Pieces never used and practically like Brand New and Crisp! Just go read the YouTube comments on this big box PC game no one practically knows at release it came with The Dungeons & Dragons Board Game Pieces and people are rage begging in the comments for it! Own a piece of Gaming Relic history.

Disc 1 has 1 tiny scratch the rest of the disc is in mint condition. All other discs are in mint condition including soundtrack and video CD. Diablo II Collector's Edition Big Box PC 100% Complete.

The item "Very Rare Diablo 2 II Collector's Edition Big Box PC Dungeons Dragons BoardGame" is in sale since Sunday, March 28, 2021. This item is in the category "Video Games & Consoles\Video Games". The seller is "tennnemo" and is located in Oak Ridge, Tennessee.