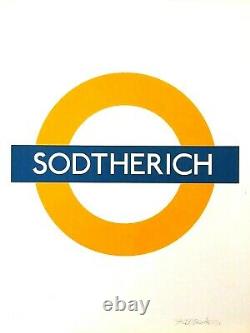 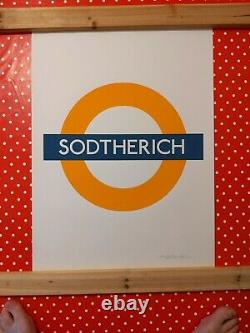 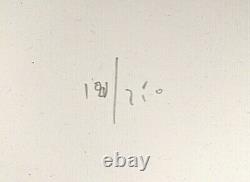 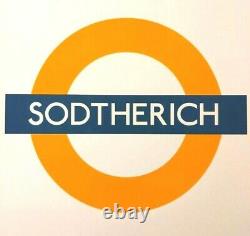 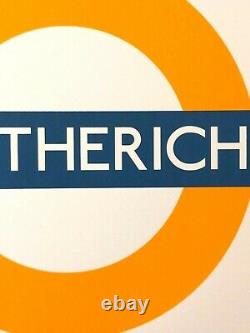 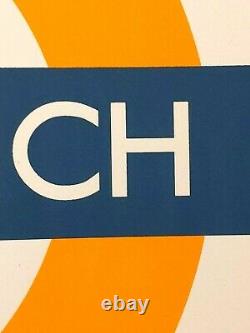 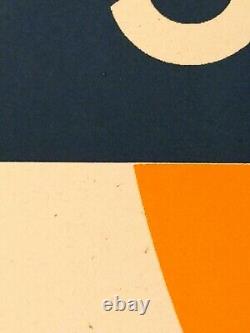 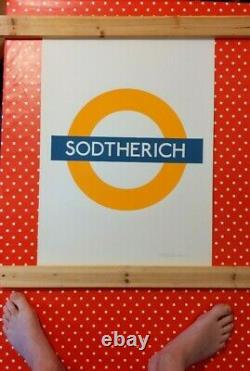 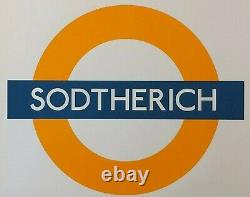 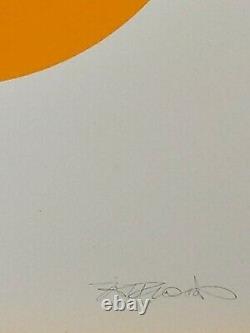 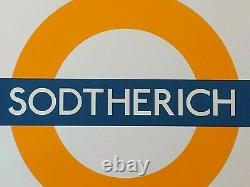 In Blakenall, Walsall, April 10th 1971. Signed, and numbered by Chu from an edition of 250. Fashioned in the same colours as the east London over ground rail network, and made from an anagram of Shoreditch (rags to riches part of east London), this print is in two vivid colours on thick recycled stock paper. The same design initially appeared as an A4 screenprint at the Monobrow show in Mayfair. You may remember the last time Chu painted Sodtherich on a wall around the time of the general election & the east London over ground rail network opening its full, first, operation.

Chu explores (literally) new perspectives and embracing computer-aided technologies, Chus work has continued to push back the boundaries of graffiti since he first began experimenting with aerosol paint & home computers in the late 1980s describing his creations as gently reminding us of the everyday conflict between digital and analogue devices. During his 30 years of experience he has successfully gained a reputation working with some of the most culturally influential artists of our time. Projects with Banksy and Jamie Hewlett, collaborating at the Swiss Embassy in London and for the groundbreaking opera Monkey Journey to the west.

Being a few of the highlights he is humbly proud to mention. An ardent defender in the use of aerosol paint since 1988, starting out in the midlands Walsall and now living in London pursuing a studio career Chu has contributed cutting edge creations on public works, various galleries and group shows around the UK. Graffiti artist Chu has been painting in the streets since the early 1980's. He is probably best known as the world's first 3D graffiti artist.

Most recently he has been to Afghanistan running a workshop on graffiti in Kabul with an Afghan art collective called Roshd, or'growth'. Wayne'Chu' Edwards was born in Blakenall Walsall in 1971.

He went to college in Walsall to study Graphic Design but dropped out before finishing the course. He then spent several years working with Walsall Borough Council running aerosol workshops. This lead to him setting up one of the Country's flagship'legal' graffiti locations, the Paddock and becoming'Part-time Temporary Aerosol Art co-ordinator'. Chu then worked for a computer games developer on games such as Aladdin for the Gameboy.

Since 1996 he has worked freelance which has included working as a print/design and events consultant for Banksy and collaborating with Jamie Hewlett on a massive 434m mural on a Virgin Pendolino Train promoting the opera Monkey Journey to the West. Post By: shangri-la Date: June 23, 2015 Category: News Tags: art, Contemporary Art, Glastonbury Festival, Graffiti, Politics, Shangri-La. Chu is a cunning linguist, and he has created lots of work playing on words and their combination and structure to create poignant and witty comments, such as Sodtherich replacing Shoreditch on a tube sign.

Hes created LOTS of artwork for the festival dwellers of Shangri-La, appropriate to the Occupation of Hell and its rally. Chu is many things an artist overall, but a politically minded, social commenting one at that. He helped Banksy become the svengali we know him as today, he singlehandedly created the worlds largest aerosol mural, the Hole In The Wall, he also pioneered graffiti as a youth art within local authorities, he has taught in Afghanistan and also paints in 3D. We could go on forever about how great Chu is but lets get down to the artwork for this year. Leading up to the festival well be posting a teaser of his huge mosiac piece, which will be revealed at exclusively at Glastonbury.

Chu has also created some animated word ladders which will take over our stage backdrops in the Shangri-Hell area and working on a special Shangri-la #CAMPAIN series around the site. Heres how Chu started out, I started painting in aersol in 1983, inspired by the lettering on a school friends electro mix tape. I became involved with a community arts project and in 1988 we secured a legal spot called The Paddock.

The local authority employed me as one of only two practicing graffiti writers in the country, to take care of street art provisions in the borough. Through travelling, painting and exchanging photos I would form links with other artists nationwide and before long I was invited to join Ikonoklast, the UKs first Super Crew. Painting became a family affair with firends painting alongside one another, Desire, Goldie, Disc, Kel & Size from Walsall, Part2 from York, System from Llandudno, Juice, Cryse & Fuze from Birmingham, Rough from London, Temper from Wolverhampton, SnugOne from London, Solo One from Hinckley and Inkie from Bristol. Began using home computers in Junior school 1979, as part of select team of whiz-kids.

Left after getting 6 O Levels without revising, including two Maths. September 1983, picked up an aerosol can to paint with in Streetly, Walsall.

College education on Graphic Design course being guinea-pigged in Walsall. Failed to enter the second year of study again after trying for a full-time position. The course leader at the time: I admire your healthy irreverence towards authority, but there is no place here for your work.

Left London in 2012 for Amsterdam & Barcelona. Used aerosol paint to distort the plane with large anamorphic projections. Reached over 27,00 views in one day during protests against cuts in 2012 (Sodtherich sticker photograph on Flickr).

This item is in the category "Art\Art Prints". The seller is "ashbinx74" and is located in Bruton. This item can be shipped worldwide.